The place and dimensions of the house are mostly specified and since the veggie and berry garden will be in the back I can start these two before the house without being afraid that the construction workers will rip it apart again. The earth is of good quality, so much that the weeds grew last summer with such speed behind my back while I was attending to the long-neglected mulberry tree at the far end that I actually lost sight of some of the smaller branches and twigs that I had cut off.
During the winter I made myself familiar with the workings of the SketchUp software and started to plan the garden shed which will mainly house my woodworking shop and some other crafts like leather and model ship, that are put on hold for the time being. I had planned to built it at the allowed size of 10 sqm, but calculating the material costs had me shrinking it again

Size matters
2x4 is the most commonly used system for diy projects and readily available in the home centers with lengths of 6 feet or 12 feet. But the panels have a standard size of 91 by 182 cm, meaning I wasn't able to use an already finished model from the web for my SketchUp drafting and it also kept me from buying some plans through the web, not to mention that, despite the fact that I count myself as rather good in calculating,  I cannot get used to the American system of inches and fractures.

Bicultural
As I grew up in a large half-timbered farmhouse with the typical red bricks walls, I decided to design the front of my shed in a similar way for the lower half, meaning one compartment of roughly 90 x 90 cm on each side of the front door. I really would love to use even more bricks, but as this is rather weak towards earthquakes and in consideration of my budget it will be just these, but I will instead "pimp" them with some two-colored patterns, something also from my part of Germany

2011-4-18
Looks like spring has arrived early this year, which I am using to do some gardening, and of course working on my garden house. Today I want to finish the 6 blocks that function as foundation. Working the earth for the potatoes I had already unearthed more than enough stones of various sizes to put below the blocks, making it more stable towards sagging than just digging them in. 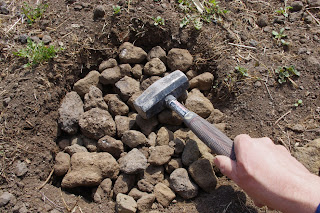 Having a heavy hammer in your tool box comes in handy when doing bigger projects, and you can see that this particular piece has already been used a lot, actually most of it before "appearing" in my tool box. And yes, that is my right hand, just to get a feeling for the size and because I prefer using heavy tools with the right hand, especially when using it near myself. But this hand will have rather few appearances for the simple reason that its damn difficult to use a camera with the left hand! 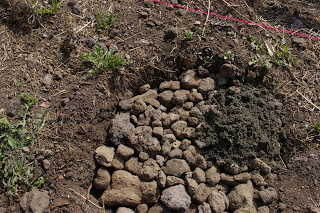 On the top, put a layer of smaller gravel and, after working the hammer, cover with sand. Yes, this is the color of how sand looks like in most of Japan. 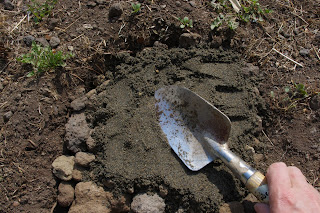 Flatten with the shovel, move your feet out of harms way and gently drop the block on top 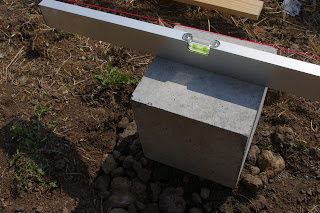 Use the level to straighten things out, if necessary by use of hammer 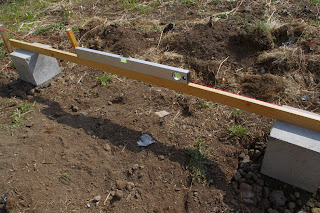 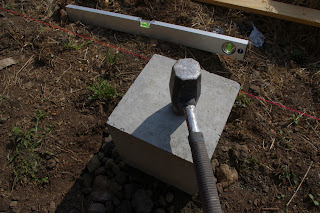 A few wacks with the hammer to get it settled, and off to the next one 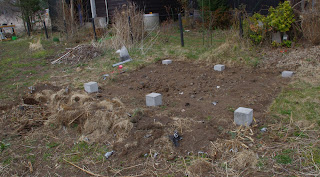 As you can see, the front blocks are more on top of the soil than halfway burried as planned. The earth does slope down a bit, and trusting my old and experienced eyes, I started with the back row...What you cannot see, is that the front middle block is also 8 cm out of the middle, another victim of my eye leveling. I should have realized from the line of the potatoes I planted that it's not a very good thing to just do eye-leveling when around you everything is out of level and not straight...