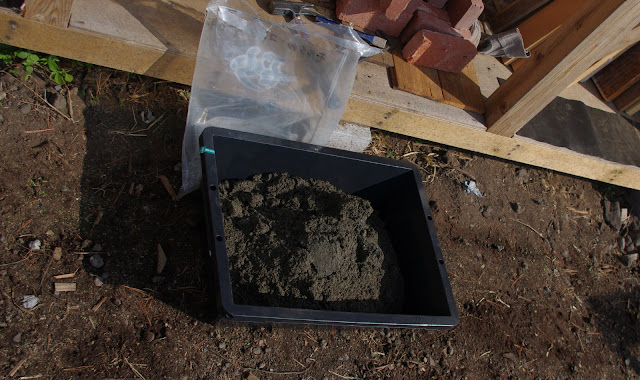 After more than 20 years I am mixing mortar again and holding a  trowel in my hand - and it feels good. The smell and sound support my memories, I automatically do the movements I had done so many times during my 3 years of apprenticeship as a mason, which was serving as the base for the  architectural college study I entered afterwards; but that lasted less then 2 years before I quit and went off to Japan... 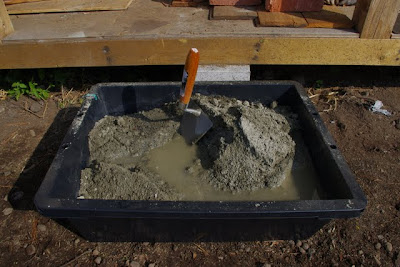 I was happy with the trowel, even in Germany there are different shapes depending on the region and here in the home center I had the choice between a rounded heart shape and the delta. So smaller in size I felt comfortable with the straight edge and the narrow tip as if I had never stopped using it.
Mortar can be purchased as a ready to use mix, but that is more expensive when you are using a lot like I would need. So I purchased a 25kg sack of portland cement and three 20 kg bags of dark grayish sand. I than mixed it dry together before adding the water and started the wall. 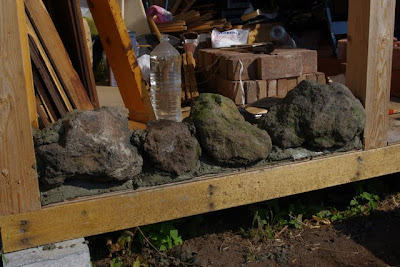 I had a bunch of smaller rocks collected from our lot since the beginning, knowing that I would put them to use somehow. But the idea to use them as a base wall came to me only much latter, originally I had planned to  use only red bricks for the lower compartment, hence the mortise below the middle beams in the front wall. And also I had more than enough for this wall I didn't have that much to choose from, so it might look imposing from the front there are a few very thin points which I intend to strengthen with mortar from the back and form a straight base on top for the bricks that will come atop them.
As for the bricks, they are not a common building material because they are very weak to earthquakes and so I had to search around to find some cheap ones. These are actually rather small in size, only about 18 cm long, giving me 4 1/2 lengths for one field. On the other hand this will look nice with only two small fields to fill and gives me more freedom to do some ornamental stuff.

After a few hours of swinging the trowel, slapping the mortar, swapping the stones back and forth to find a nice fit, I was finally done. I used the grout trowel to fill the small holes and flatten the surface of the mortar and after it had fairly dried I used a big brush and lots of water to wash the mortar off the rocks and smooth the mortar lines. 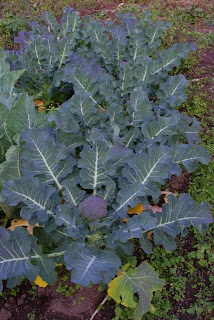 In the garden the broccoli is growing steadily showing not a single caterpillar or other bug after I had sprayed the leafs once, because they had been infested by green caterpillars by the dozen and summer time wasn't the right season for me to look after the garden more than once a week. 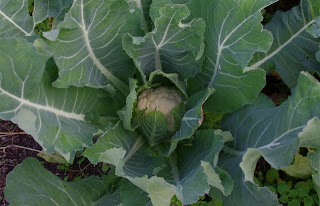 Even the cauliflower, which we had planted together with the broccoli was opening up beautifully, can't wait to prepare some nice food with these.

Email ThisBlogThis!Share to TwitterShare to FacebookShare to Pinterest
Labels: Gardening