This year is one of the very few times I actually am not working around Christmas. In Tokyo, December used to be the busiest time of the year where everyone suddenly seems to have money to spent again with year-end-parties big and small plus Special Dinner offerings around Christmas, 95% of them couples. So the 24th is not a public holiday the 23rd is, as it is the Emperor's birthday. And even here in Karuizawa, which is preparing for winter from November onwards and goes into "hybernation" (冬眠中, touminchu. I've actually seen shops putting this sign out to show they are on winter break. And it's a common word among the many part-time workers about what they will do in winter, as many will take an non-voluntary extended holiday from January up to the middle of April. Only few are willing to drive on snowy roads to work at ski-resorts or feel enough financial strain to engage in lower jobs like room cleaning in one of the many hotels around here.), Christmas means mostly work, depending on which day of the week it falls. So I decided to do a very common Christmas dish, roasted chicken and gathered information on the internet during the last days. Luckily I chanced on a helpful food-program last week which had chicken stuffed with rice, roasted in a cast-iron pot. Since I wanted to have Hannah eat the same food too, I decided against their flavouring with raisins and marons, but instead opted for a more gentle basil-flavour, took the idea of using sweet potatoes(amongst the usual ones) for the vegetable bed from another blog, and from "Simply Recipes" I got the idea of a honey glaze since I didn't want to use garlic butter. I later returned again to this blog to also find some tips about using the leftovers and bones to make some chicken stock. 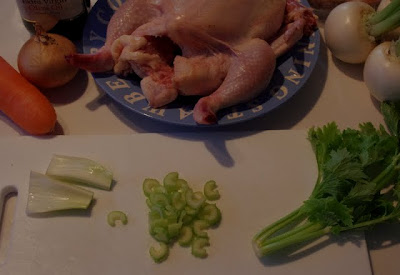 I started by cutting some celery into small slices and sauteed them in olive oil in the cast-iron pot. I thew in some sun flower seeds as well and after they where browned I scraped the mixture into a bowl. 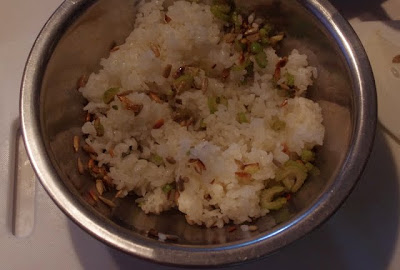 To this I added cooked, warm rice, parsley, dried basil and seasoned it with salt and pepper. 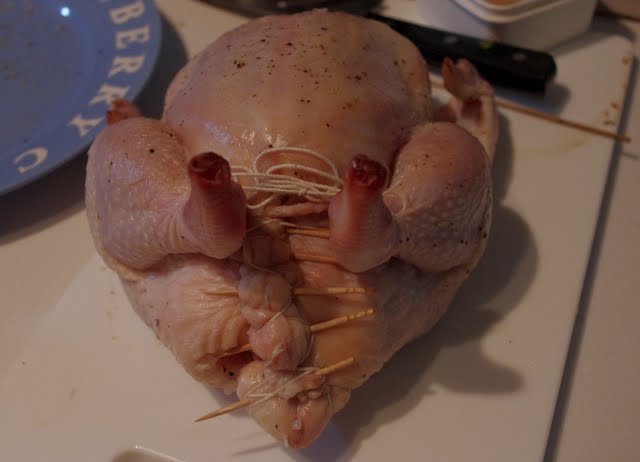 I had prepared the chicken already a few hours ahead by washing the outside and inside with cold water and patting it dry. It was then left on the counter to gain room temperature and for the skin to dry for a crispier finish (which didn't finalize as much as hoped for). I stuffed it with the rice and tied the opening with tooth picks which I secured with some string that followed to tie the legs together. I than rubbed salt and pepper on the whole of the outside and put it on a bed of vegetables for which I used roughly chopped onion, carrot, turnip, and aforementioned sweet potato. Some recipes suggested sauteeing the vegetables first which I dutifully did, because I only have a rather small sized microwave oven and since the pot would stand on the bottom I worried the vegetables wouldn't get enough heat, which turned out to be far off the mark. 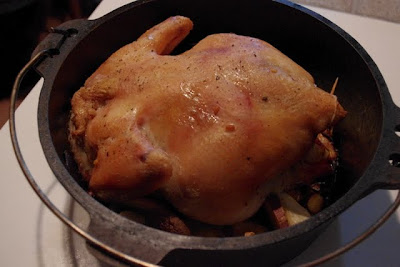 I preheated the oven to 270 degree and put in the pot with the chicken breast downwards. After 40 minutes I lifted the iron pot out and turned the bird breast facing up. At this point I brushed the now up facing breast part generously with honey.
Around 15 min later I turned down the heat to about 180 degrees and roasted it for another 45 min until the  digital temperature reader showed that the inside of the meat had risen to about 75 degrees. After lifting the bird onto a dish for cutting I realized that a few of the vegetables had been burned black, but enough was left, also these where extremely soft, with the sweet potato tasting the best. I had worried in the beginning that not giving any soup or liquid into the pot might just burn the vegetables, but the chicken dropped off quite some liquid, which was more than enough. It was rather the sidewalls of the cast-iron that became too hot and burned some of the greens. And the breast skin didn't turn out as crispy as I had hoped for. Next time I will turn the bird earlier and lower the temperature earlier too which might help. I also would brush the skin before roasting with olive oil. 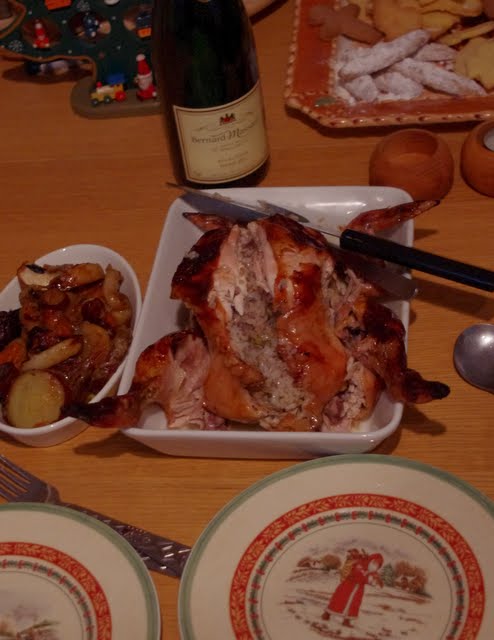 What did turn out very nicely was the soft tenderness of the meat, totally different from the usual fry pan cooking, we hardly needed any knife. And the stuffing of rice was just delicious as well. 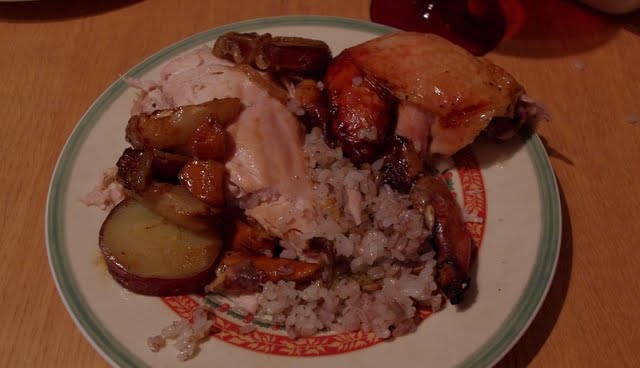 The arrangement on the plate might look rather rough, nevertheless the taste was great! Hannah enjoyed the food as well, shoving the rice happily into her mouth with her hand. 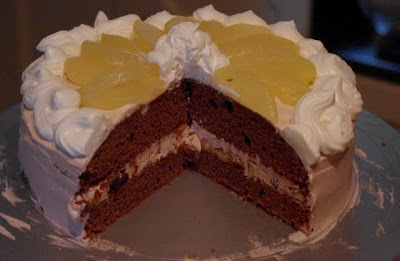 For dessert I had prepared a chocolate cake, Sachertorte, but spiced it with cinnamon, clove, cardamon and nutmeg. I sliced it once and filled it with roasted walnuts and rum-raisins (that are always at hand in the fridge in this house) . I also had planned to put in some sliced pears as well but totally forgot about it. And so they made part of the topping, together with some whipped cream.

Email ThisBlogThis!Share to TwitterShare to FacebookShare to Pinterest
Labels: Food