Last week our little Hannah, now 1 year two months old, came down with high fever that was finally diagnosed as three-day-fever, roseola.  It is one of those diseases that little kids go through once and than the body becomes immune. Nevertheless it is heartbreaking to see such a lively happy little kid become weak and listless, not having much appetite either. So I stayed at home the whole week, tending to her or holding her while she was sleeping in my arms. 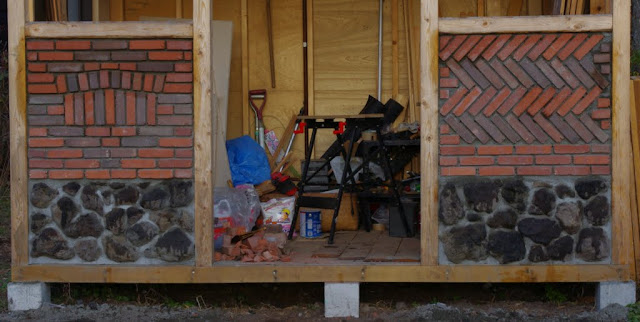 It looks like winter is marching towards us and I still haven't finished the front side of the garden house! I worked on it this week and finished the two brick compartments. It didn't turn out quite the way I had imagined, but it still looks good enough to me, and to the unknowing Japanese it looks even better. I had drawn up some designs beforehand, but when starting I realized that these bricks where not in a 3 to 1 width to height that I had thought them to be, poor measurement and mathematics on my side. It's been more than 20 years that I did masons work, so there are a few things I don't remember or only half. 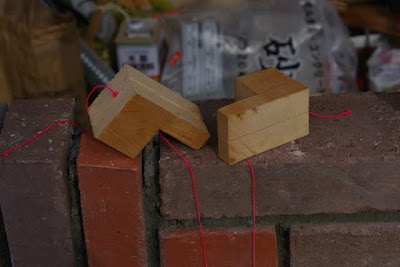 But for some reasons I still remembered how to make these "mason's corner" to stretch a string across to follow after without having to drive nails into the wood. 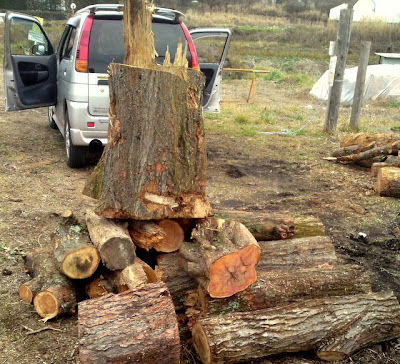 On Tuesday, I had a "detour": close to our plot is a piece of land where people can leave cut-off tree trunks for other persons to take home and make into fire wood. This year it had been empty the whole time but driving by it in the morning I saw lot of trunks there. So I emptied our car, fit in a blue-sheet and started hauling of the pieces I could handle. And than my eyes fell onto a beautiful tree stump, nearly square at the bottom, about 1m in height where it was going off into two trunks. It looked perfect for a chop block! Only problem was how to get it into the car, as it was probably above 100 kg in weight. I nearly gave up on it but than had the idea of building a ramp out of the thinner trunks lying around. So I started "rolling" the beast towards it and than slowly up. Real slow, because every push felt like having to fight a Sumo ringer with my feet slipping and me fast running out of breath. 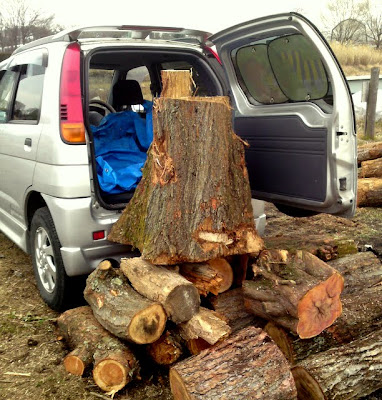 Finally I had it on top, put a heap of logs to the side to stand the stump up on which was another battle in itself, backed the car up against it and pushed it inside, more or less, because the widening bottom was impossible to get in. With the stump looking out of the back I slowly drove it to the far end of the garden and heaved it out again. Using a long trunk as a lever I was able to push it of the road, but there are still another slightly uphill 10 meters until its final place...

And yesterday I had the second "detour" of this week, when my friendly neighbor came over and suggested to cut off the high weed that was still covering most of the garden with his engine-powered weed-cutter. These are a very common sight to see also I personally had never used one before. So he started at the sides (as fire control in his words) and after I had seen it in action, I took over and cut off the whole stuff. In many places it had been about 1.5 meters high, leaving the Garden House nearly unseen from the road, but now that the plot lies barren, the house is easily spotted from afar. 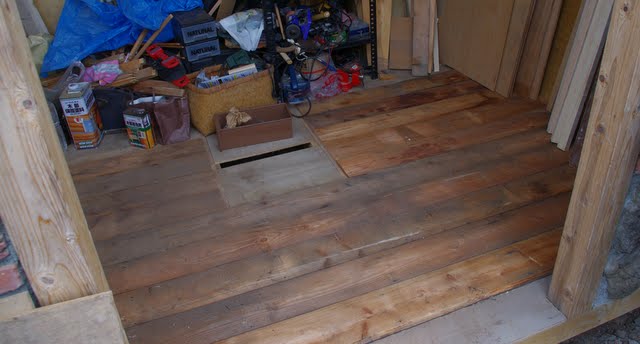 Having finished the brick works I cleaned the inside today and lay some floor boards I had gotten from the near by guest house as it was being demolished. They had been used as a outside wall covering, heavily painted on. So I put the outside on the bottom and had the raw inside facing up, which also worked quite nicely with the bends. They are single grooved, making them stick together very smooth.
And finally I can walk inside the house without worry to crash through the floor!